WHO IS ROBIN SHARMA?

Robin Sharma is one of the world’s premier thinkers on leadership in business and in life. He is the author of numerous books, including the 1 international bestseller The Monk Who Sold His Ferrari.

Sharma is also in constant demand across the globe as a keynote speaker for organizations dedicated to developing leaders at all levels and as an executive coach to people ready to create extraordinary work and personal lives.
He had clients include Fortune 500 companies such as Microsoft, General Motors, IBM, FedEx, Networks, as well as health-care firms and public sector organizations.

For nearly 20 years, many of the most well-known organizations on the planet, ranging from Nike, GE, Microsoft, FedEx, PwC, HP and Oracle to NASA, Yale University have chosen Robin Sharma for their most important events, when nothing less than a world-class speaker will do.

Shed Simove is an entrepreneur, author and must-see keynote motivational speaker. His areas of expertise are ‘CREATIVITY’, ‘INNOVATION’, ‘SALES’ & ‘GUERRILLA MARKETING’ and he has twenty years experience in these areas. Following a degree in Experimental Psychology at Balliol College, Oxford, and two years working in Disney World, Shed worked in TV Production, heading up programmes including ‘The Big Breakfast’ and ‘Big Brother’.

He then went on to forge a highly innovative merchandising empire – creating conceptual gifts, executive toys, best-selling adult sweets, books, greetings cards, and even his own currency. To date, Shed has sold over 1.5 million novelty gifts worldwide and has won ‘Gift Of The Year’ twice.

The presentations Shed delivers cover the topics of ‘Innovation In Business’ and ‘How To Think Differently’, in order to obtain huge future success. They are highly memorable, entertaining, instructive and inspiring talks that showcase his business insights, methods for sales growth, tips for creative thinking and his amazing adventures. He uses his own entrepreneurial journeys to deliver concrete techniques that give any company, organisation or audience practical methods for creative thinking and ways to come up with new ideas that will increase their bottom line.

WHO IS SETH GODIN?

SETH GODIN is the author of 18 books that have been bestsellers around the world and have been translated into more than 35 languages. He writes about the post-industrial revolution, the way ideas spread, marketing, quitting, leadership and most of all, changing everything. You might be familiar with his books Linchpin, Tribes, The Dip and Purple Cow.

In addition to his writing and speaking, Seth has founded several companies, including Yoyodyne and Squidoo. In 1998, he sold Yoyodyne to Yahoo! and became Yahoo’s vice president of direct marketing. His blog (which you can find by typing “seth” into Google) is one of the most popular in the world.

In 2013, Godin was inducted into the Direct Marketing Hall of Fame, one of three chosen for this annual honor.

His latest book, What To Do When It’s Your Turn is now in its fifth printing. You can find it at yourturn.link

WHO IS DANIEL GOLEMAN?

Daniel Goleman is an internationally known psychologist who lectures frequently to professional groups, business audiences, and on college campuses. As a science journalist Goleman reported on the brain and behavioral sciences for The New York Times for many years. His 1995 book, Emotional Intelligence was on The New York Times bestseller list for a year-and-a-half, with more than 5,000,000 copies in print worldwide in 40 languages, and has been a best seller in many countries. Apart from his books on emotional intelligence, Goleman has written books on  topics including self-deception, creativity, transparency, meditation, social and emotional learning, ecoliteracy and the ecological crisis.

The Harvard Business Review called emotional intelligence— which discounts IQ as the sole measure of one’s abilities — “a revolutionary, paradigm-shattering idea” and chose his article “What Makes a Leader” as one of ten “must-read” articles from its pages. Emotional Intelligence was named one of the 25 “Most Influential Business Management Books” by TIME Magazine. The Financial Times, Wall Street Journal and Accenture Insititute for Strategic Change have listed Goleman among the most influential business thinkers.

Goleman is a co-founder of the Collaborative for Academic, Social, and Emotional Learning (www.casel.org), originally at the Yale Child Studies Center and now at the University of Illinois at Chicago. CASEL’s mission centers on bringing evidence-based programs in emotional literacy to schools worldwide.

He currently co-directs the Consortium for Research on Emotional Intelligence in Organizations (www.eiconsortium.org) at Rutgers University. The consortium fosters research partnerships between academic scholars and practitioners on the role emotional intelligence plays in excellence.

Goleman is a board member of the Mind & Life Institute, which fosters dialogues and research collaborations among contemplative practitioners and scientists. Goleman has organized a series of intensive conversations between the Dalai Lama and scientists, which resulted in the books Healthy Emotions, and Destructive Emotions. He is currently editing a book from the most recent dialogue on ecology, interdependence, and ethics.

His most recent book, Leadership: The Power of Emotional Intelligence, offers an up-to-date summary of his thinking on leadership by collecting key excerpts from his books together for the first time in one volume with his articles from the Harvard Business Review. These include “What Makes a Leader? and “Leadership that Gets Results.”

Goleman’s other recent book, The Brain and Emotional Intelligence: New Insights gathers together recent findings from brain research and other sources on topics ranging from creativity and optimal performance, the brain-to-brain connection in leadership, and to how to enhance emotional intelligence itself.

Goleman’s 2009 book Ecological Intelligence: How Knowing the Hidden Impacts of What We Buy Can Change Everything argues that new information technologies could create “radical transparency,” allowing us to know the environmental, health, and social consequences of what we buy. As shoppers use point-of-purchase ecological comparisons to guide their purchases, market share would shift to support steady, incremental upgrades in how products are made – changing ever thing for the better.

Goleman’s work as a science journalist has been recognized with many awards, including the Washburn Award for science journalism, a Lifetime Career Award from the American Psychological Association, and he was made a Fellow of the American Association for the Advancement of Science in recognition of his communicating science to the general public.

Sophia is the first robot in history to be a full citizen of a country. The humanoid is Hanson Robotics’s most advanced and celebrated robot with an expressiveness that the world has never seen on a robot. She can simulate a full range of facial expressions, track and recognize faces, look people in the eyes and hold natural conversations with them.

The Company and its founder, Dr. David Hanson, have built a worldwide reputation for creating robots that look and act genuinely alive, and produced many renowned robots that have received massive media and public acclaim.

Sophia made her debut at the South by Southwest show in March 2016. Since then, she has become a much-sought-after media personality:

ADAPTING TO THE COMMUNITY

Much like a child movie star, Sophia is maturing and learning under public eyes. News media have grilled her incessantly about the possibility of robots one day destroying humans, and she has stretched her growing mind to grapple with the complex issues involved.

However, in recent months she has settled on a stable and strongly pro-human ethical perspective. In June 2017 at the “AI For Good Global Summit” United Nations event in Geneva, she issued a powerful statement in favor of human-AI cooperation for the benefit of all sentient beings.

Through all her diverse experiences and ups and downs, Sophia’s beauty, incredible human likeness and expressiveness has charmed people from all around the world. Over time, her increasing intelligence and her evolving story as an awakening robot will enable her to connect and build trusted relationships with people everywhere regardless of age, gender, and culture.

On 11th of May 2018, ​BRAND MINDS is bringing Sophia in Romania, to join The Eastern and Central Europe Business Summit of the year!
Don’t miss the chance to meet her! Book your event pass here. 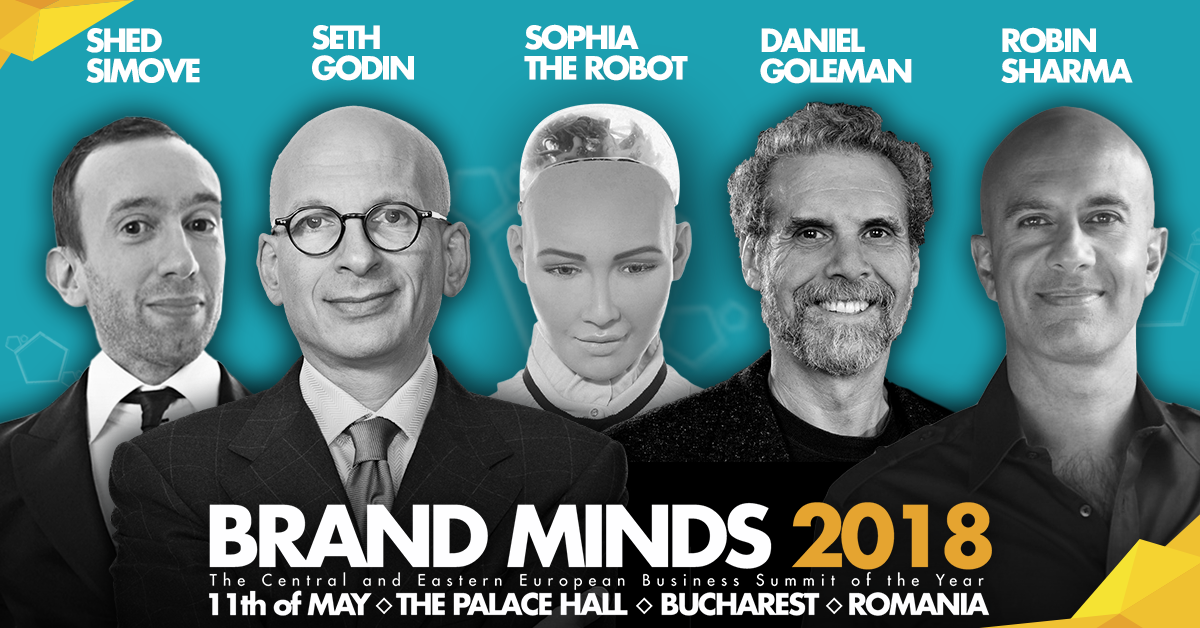